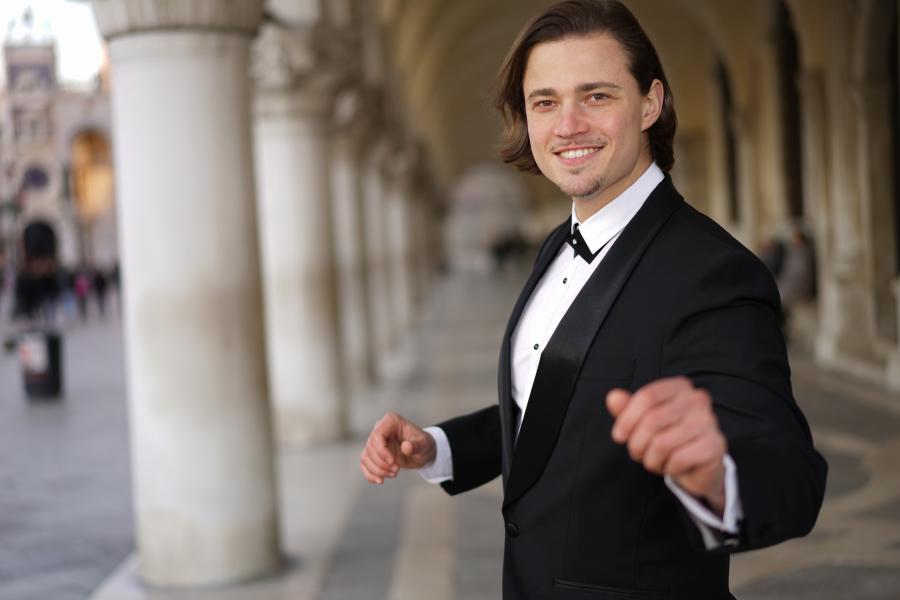 Viktor Andriichenko was born in Kyiv in 1986. In 2010, he graduated from the Tchaikovsky National Music Academy, the class of violin. Throughout 2013-2015, Viktor Andriichenko was the first violinist with the National Honoured Academic Symphony Orchestra of Ukraine. Simultaneously, he was developing his voice as a countertenor: he attended master classes in Switzerland and Germany; he was privately taught by professors Gabriela Fuks (Munich) and Elizabeth Wilke (Salzburg). Since May 2016, Viktor Andriichenko was a Fellow of the Munich Music Society Foundation. Since October 2017, he has been studying at Graz University of Music and Performing Arts (Austria), the Vocal Faculty, under Prof. Elena Pankratova, a world-renowned opera singer.

In 2014, he was touring Poland and Switzerland as a violinist and countertenor. In June 2015, he was a finalist and soloist in three projects of the chamber opera ‘Kammeroper Schloss Rheinsberg’ vocal competition (Germany): “Galaopera”, “Farfallino”, and “Rock Barock”. In 2016, Viktor Andriichenko participated in G.F.Handel’s opera “Alcina” as Ruggiero at the ‘Theater Werk Munich’, as well as in various concerts, including the concert of Ukrainian music with the ‘Ukraine’ Chamber Orchestra in Munich and LvivMozArt festival presentation in Lviv, where he performed works by G.F.Handel, D.Bortnianskyi, E.Humperdinck, and the ‘Arias of Heart’ solo evening in the ‘Bechstein’ salon in Kyiv.

In March 2017, Viktor Andriichenko successfully debuted on the stage of the National Philharmonic of Ukraine in Kyiv with the ‘Kyiv Soloist’ National Chamber Ensemble (the concert was recorded live by the National Radio of Ukraine). He also participated in the concert dedicated to the days of the city of Kyiv in Munich in the Little Hall (Gasteig) of the Munich Philharmonic in June 2017. Viktor Andriichenko is a participant of two projects of the First LvivMozArt 2017 International Festivals: ‘Splinters of the Baroque’ and ‘Escape’.

This year, Viktor Andriichenko has had four concerts with the Stavanger Symphony Orchestra (Norway). In addition, he took part in the Gala Concert - opening of the second opera festival ‘OperaFest Tulchyn’ (Ukraine), and the Gala Concert ‘From the Depth of Heart’ in Saarbrücken (Germany).