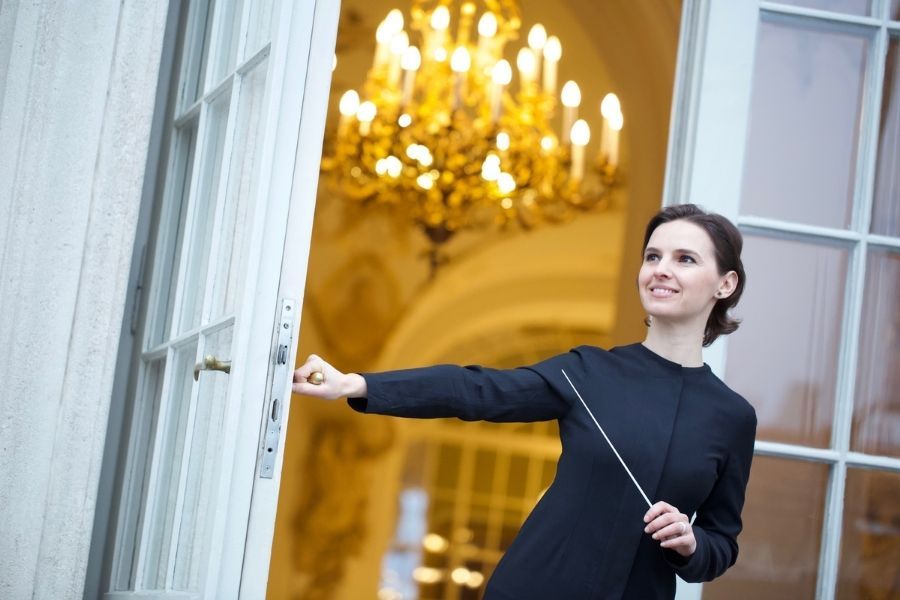 Oksana Lyniv is a Ukrainian conductor, one of the most prominent women-conductors on the world stage. Currently she is a principal conductor of the Graz Opera and the Graz Philharmonic Orchestra in Austria. She is a founder and art director of LvivMozArt Festival, Lviv (Ukraine), founder, conductor and art director of the Youth Symphony Orchestra of Ukraine/YsOU. She is a winner of prestigious TREBBIA International Awards in nomination “For Art Activity” and winner of “Ukrainian Woman of 2019 Award” in nomination “Culture”. She was awarded with “Star of the Year 2015” status in nomination “Classics”, and a prize of Munich Opera Festival in 2015.

Oksana Lyniv is Honorary Ambassador, awarded the medal “For intellectual courage” from magazine “Ji” and also is a winner of prestigious Ukrainian awards: “People of Lviv” (2017), “People of modern times” (2017), “BOOM Awards 2018”. Ukrainian conductor is amongst “100 most influential women of Ukraine” from magazine “Focus” and “Top 100” from magazine “Novoye vremya” (2019).Two years in a row she was nominated in Austria “The most favourite Styrian” status in category “Art” (2018-2019).

In 2004, Oksana Lyniv was awarded the third prize at the Gustav Mahler International Conductor Competition in Germany. In 2008-2013, she worked at the Odesa National Academic Theatre of Opera and Ballet. Throughout 2013-2017, she was the conductor and musical assistant of the principal musical director of the Bavarian State Opera House in Munich, Germany.

In September 2017, she debuted on the stage of the Golden Hall of Musikverein in Vienna together with the Graz Symphony Orchestra. R. Wagner’s “Der Fliegende Holländer” held at the Grand Theatre of Liceu, Barcelona, and D. Shostakovich’s “Lady Macbeth of Mtsensk District” held at the Bavarian State Opera House, Munich, are among her latest opera performances as a guest conductor. Next season Oksana Lyniv will debut as a guest conductor at the Stuttgart Opera, the Deutsche Oper Berlin in Germany, and the Theatre an der Wien in Austria. Additionally, she will collaborate with Bruckner Orchester Linz, Tiroler Simphonie orchester Innsbruck, Orchestre Symphonique des Alpes, Badische Staatskapelle and Düsseldorfer Philharmoniker, and Duissburger Philharmoniker (with which she will debut on the stage of the Concertgebouw in Amsterdam).

Lately Oksana Lyniv with great success debuted with the Dusseldorf Symphony Orchestra, with the Bruckner Orchestra in Linz, in the Stuttgart Opera. She debuted in the Liceu Opera Barcelona, in the Royal Swedish Opera, in the Berlin State Opera and in “Theater an der Wien” in Vienna.

Simultaneously with brilliant international career Oksana Lyniv ardently takes charge of development of Ukranian classical music and is a cultural ambassador of Ukraine in the world. In 2016, on her initiative International festival of classical music LvivMozArt was founded in Lviv, which is managed by her as an art director. Also in 2016, on initiative of Oksana Lyniv the Youth Symphony Orchestra of Ukraine/YsOU was founded and became the most powerful platform in the history of state for developing young musicians from all the regions of Ukraine, as well it already won international recognition with its splendid perfomances in Bonn, Berlin, Graz, Lviv and Kyiv.

The important debuts are planned for the next season 2019/20: with the Berlin Staatskapelle, with the Munich Philharmonic Orchestra, the Barenboim-Said Akademie with the Pierre Boulez Saal in Berlin. Debut in the Berlin State Opera with operas “Medea” by Luigi Cherubini, “The Magic Flute” by Wolfgang Amadeus Mozart. And also staging the opera “Aida” by Giuseppe Verdi in historic complex The Mortuary Temple of Hatshepsut in Luxor (Egypt); staging the operas “Don Carlos” by Giuseppe Verdi, “The Passenger” by Mieczyslaw Weinberg and Sergei Prokofiev’s Ballet "Cinderella" in the Graz Opera (Austria); and staging the opera “Bluebeard's Castle” in the Bavarian State Opera.