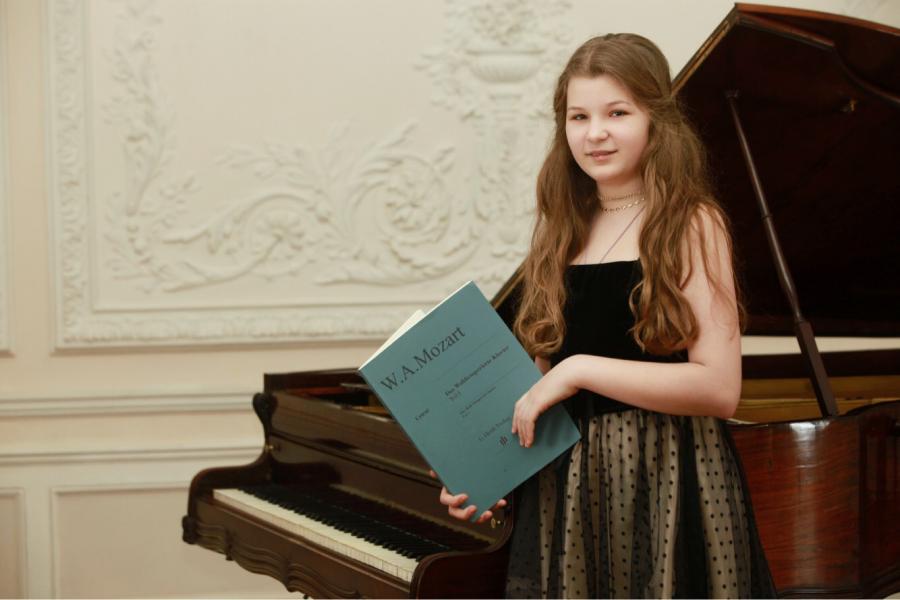 Khrystyna Mykhailychenko, who is only 12 years old, was born in Simferopol (the Crimea, Ukraine). At the early age of 5, she won her first contest, whereas at 8 she performed with the orchestra for the first time. Since 2014, Tina (as her close relatives call her) has been living in Kyiv and studying at the Mykola Lysenko Special Music Boarding School in the class of Prof. Nataliya Tolpyho. Since the spring of 2016, she has also attended the master classes of Alexei Grynyuk (Great Britain).

Khrystyna is a first-prize winner of numerous national and international competitions (the Netherlands, Belgium, Ukraine etc.), and she has won Grands Prix three times. In addition, she has performed with the orchestra for over 20 times. The musician attended several Summer Music Academies of such international festivals as “Musica Mundi” (Belgium, 2017), ISAM (Germany, 2016), IMUSE (Belgium, 2016) etc. She performed at “ArtDialogue” (Switzerland) and “LvivMozArt” (Lviv, Ukraine) international festivals. She has given her concerts in the leading concert halls of Paris, Brussels, Bruges, Washington, Istanbul, Antwerp, Vienna, The Hague, as well as in the national philharmonics of Ukraine. Khrystyna was among the top 10 most brilliant adolescents of the year three times by WoMo version (2015-2017).