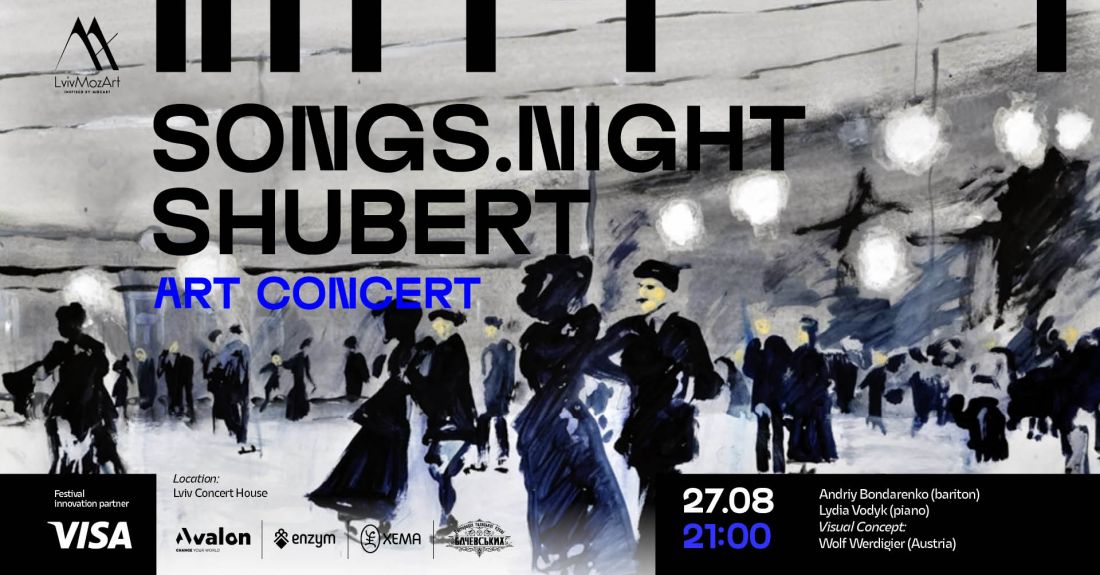 The performance of the famous Austrian urbanist Wolf Werdiger in collaboration with Franz Schubert‘s vocal music. Have been told as the first romantic, Schubert’s works emphasize on the most sensual but Wolf Werdiger's ideas framework contrasts the real with the eternal.

On behalf of the project, Werdiger has created a series of paintings to the Heinrich Heine poetry. He has also used the method of Sigmund Freud‘s psychoanalysis. The outstanding baritone Andriy Bondarenko will perform the romances from the series "Swan Song" by German composer Franz Schubert, that were created on Heine's poems. In the concert program, you will also hear the composer’s piano works performed by Titova Wiersocki Duo. It consists of two outstanding musicians: Kateryna Titova and Edgar Wiersocki.

Songs. Schubert‘s Night is the understanding of modern times which enters into a discourse with Schubert's romanticized aesthetic time. Classical works will always be on the front burner, because each generation’s interpretation of the artists will leave an imprint on them.

The soloist of the evening is the famous Ukrainian baritone Andriy Bondarenko. The finalist of the BBC competition "Singer of the World". In recent years, Bondarenko has conquered the European scene with a triumph. His charisma and artistry in combination with his brilliant vocal skills fascinates and loses the audience‘s heart.

The romances from the "Swan Song" series by Franz Schubert on the words of Heinrich Heine:

Through silence to the light

Looking for the Magic Flute